Be Part of a CSPM Committee!

Enhance your CSPM experience and help bring recognition to urogynecology across Canada! Volunteer now to serve on a CSPM Committee. You’ll share your experience and expertise, but also gain knowledge and enlarge your networking circle as we fulfill our mission to promote excellence in care, education, and research and create a collaborative multidisciplinary group that advocates for better health for those affected by pelvic floor disorders.

All Obstetrics and Gynecology residents are invited to attend this virtual event, December 2, 2022, to meet fellows from Canadian programs and learn about:

A nominee must be a CSPM member in good standing and meet the criteria listed below in the relevant position description.

Nomination Process & Application Deadline
Nominations may be submitted by any CSPM member in good standing, including the nominee him or herself. Nominations must be received by Wednesday, October 19, 2022.

Voting will occur in November, with those elected taking office on January 1, 2023.

Call for Fellow Representative for the CSPM Education Committee

We are looking for a first-year fellow to serve on the CSPM Education Committee to represent the fellow experience and perspective in CSPM's educational initiatives. This is a 2-year term (September 1, 2022 – August 31, 2024).

The leadership of CSPM stands with the International Urogynecological Association (IUGA) and other like-minded organizations, such as the American Urogynecologic Society (AUGS), in denouncing the United States Supreme Court’s (SCOTUS) decision to overturn the federal abortion protection that Roe v. Wade afforded to millions of American women. Read the statement here.

The CSPM Scientific Meeting Committee, along with the Research & Development Committee, welcomes abstract submissions for oral and video presentations at our 2022 3rd Annual CSPM Meeting. The Annual Meeting will be held on Saturday, April 30, in Toronto, Ontario.

All accepted abstracts will be presented live, in person (virtual presentation is not an available option for this meeting). All abstracts presented at the meeting will be included on the CSPM Website.

A nominee must be a CSPM member in good standing. The description of each position is listed below.

Treasurer: The treasurer shall ensure that sound financial records are kept, sound financial practices are in place, that appropriate financial reports are provided on a regular basis to the board and that necessary bank accounts for the Society’s funds are established; will be the primary contact with the office in the development of a budget for the board’s consideration; and shall submit a financial report to the membership of the Society for its review at the Society’s annual Members’ Meeting. The treasurer’s term of office shall be 2 (two) years, renewable once.

Nominations may be submitted by any CSPM member in good standing, including the nominee themselves. Nominations must be received by Thursday, September 30, 2021.

Voting will occur in November, with those elected taking office on January 1, 2022.

Please note that there will be another Call for Abstracts at the end of 2021 for the 2022 In-Person CSPM Annual Meeting, to be held in Toronto on April 23, 2022.

All abstracts presented at the virtual meeting will be included on the CSPM Website.

We are all eager to see one another in person again, but unfortunately, we will have to wait a little longer.

We've been moving forward with plans to hold the 3rd Annual CSPM Meeting in-person after having to transition to a shortened virtual meeting last year. Unfortunately, the ongoing COVID-19 pandemic continues to make planning a successful meeting extremely difficult for a small organization like CSPM.

CSPM remains committed to hosting an Annual Meeting that will deliver attendees the best possible experience - with quality educational sessions and research presentations as well as opportunities for networking and connection. With the health and safety of all of our attendees foremost in mind, the CSPM Board has made the difficult decision to postpone the 3rd Annual CSPM Meeting to April 23, 2022. The meeting will still be held in Toronto at the The Loft - Simpson Tower as originally planned.

Despite the pandemic, the need for continuing our education and presenting the latest research continues. For that reason, the CSPM Scientific Committee is shifting gears to focus on development of another stellar Virtual Scientific Session that will be held this fall. Watch your email inbox and the CSPM website for more information about this virtual offering!

CSPM is an Affiliate Society of the International Urogynecological Association (IUGA). Pelvic Organ Prolapse Awareness Month is a great opportunity for you to familiarize yourself with the IUGA patient website, www.YourPelvicFloor, and all of the resources available to share with your patients. There are over 40 patient information leaflets, including those on pelvic organ prolapse, conservative management, and surgical treatments for POP.

CSPM continues to expand its organizational structure to meet the needs of our urogynecology community. We’re pleased to announce we are creating a new Standardization Committee that will focus on developing patient education materials as well as standardized forms that can be used across institutions and provinces. Darren Lazare from the University of British Columbia has been appointed as committee chair and we are now seeking CSPM members to serve on this new committee.

Members volunteering to serve on this committee will serve an initial term of either 2 or 3 years in order to establish staggered terms. Terms will start mid-year (this year only) to establish the committee and run through the end of either 2023 or 2024.

Let us know you are interested in serving on the new Standardization Committee by submitting the following to This email address is being protected from spambots. You need JavaScript enabled to view it.:

Expressions of interest will be accepted through are due no later than Tuesday, June 29.

Next CSPM Journal Club: Wednesday, May 26 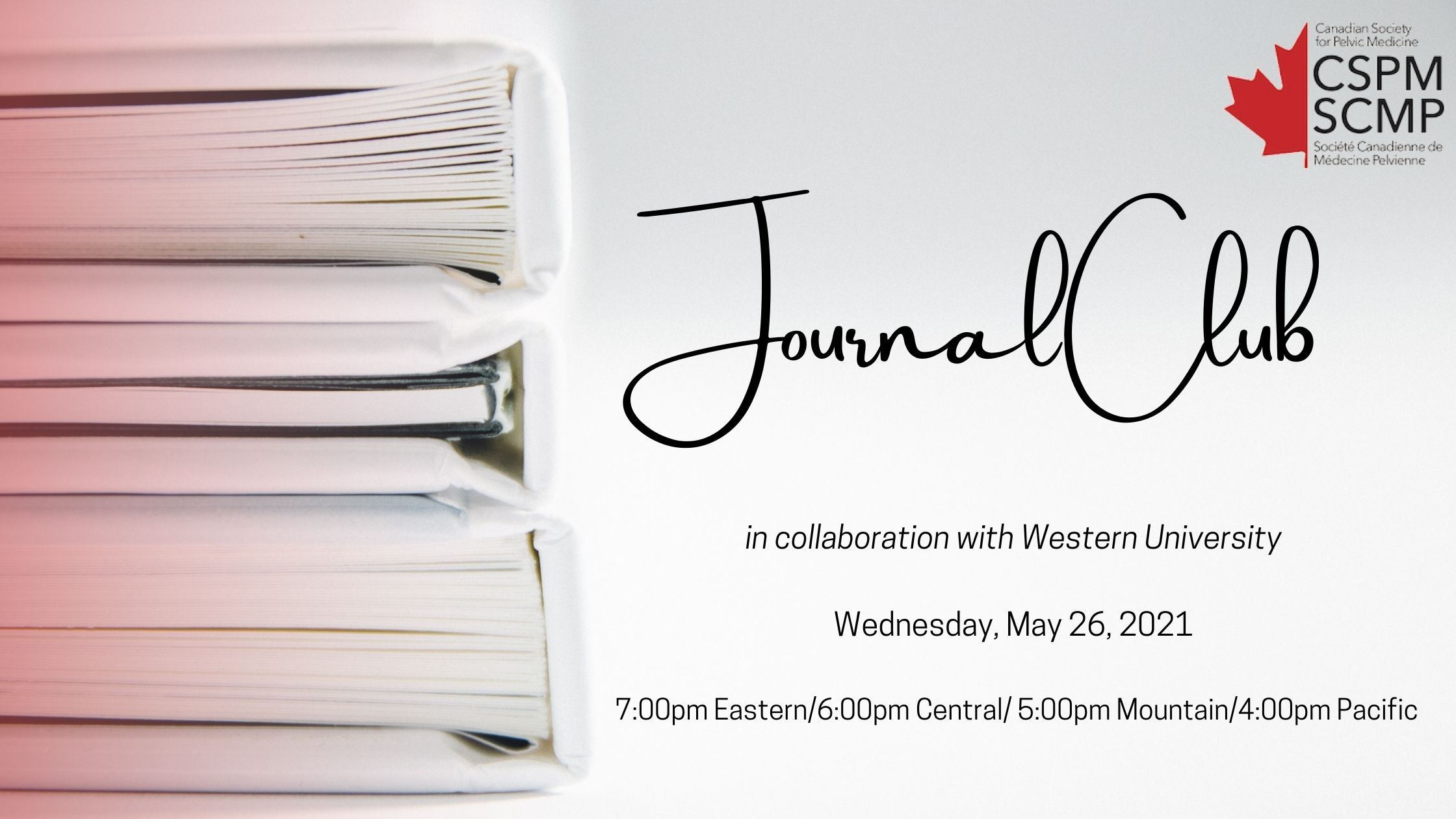 Thank you to Western University for sponsoring this session!
Members: Log in to the CSPM website to register for this session and access the article.
Not a member? Please RSVP to This email address is being protected from spambots. You need JavaScript enabled to view it. and we'll send you the journal article to be discussed and the Zoom link to join the meeting. 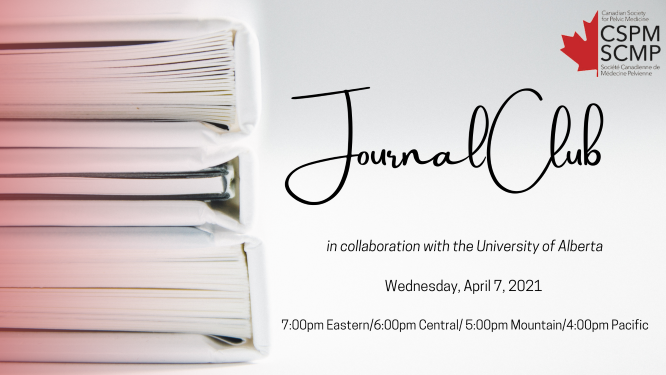 Thank you to the University of Alberta for sponsoring this session! RSVP to This email address is being protected from spambots. You need JavaScript enabled to view it. and we'll send you the journal article that will be discussed and the Zoom link to join!

* You must be a current CSPM member to use the CSPM Discussion Forum. Not a member? Join today! 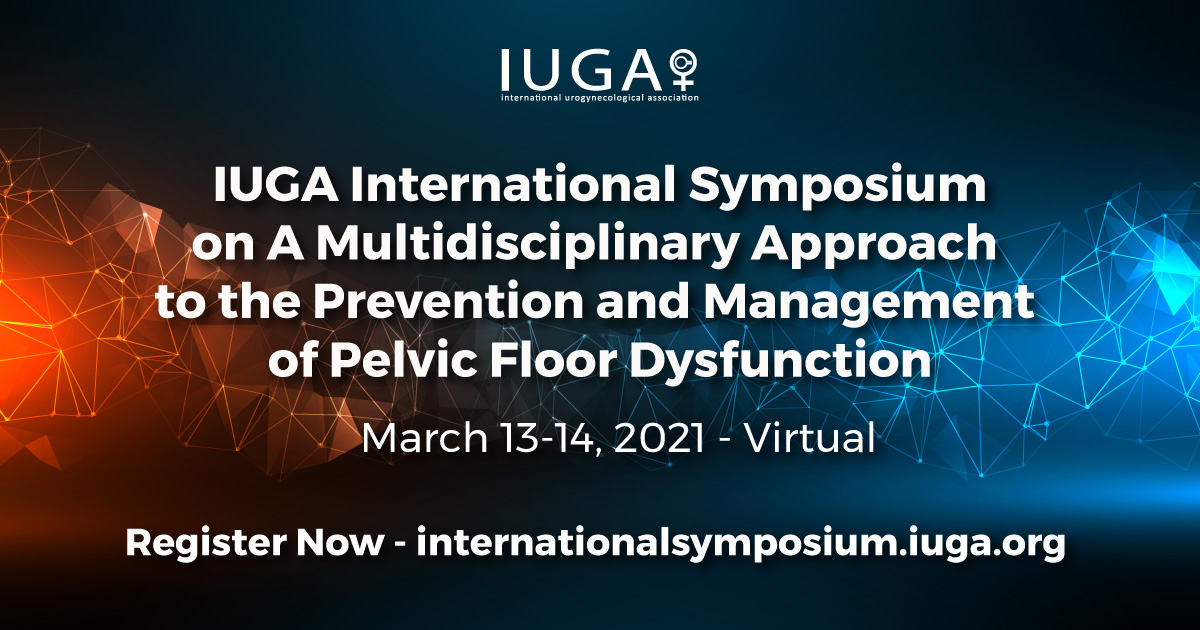 CSPM has endorsed the March 13-14 (virtual) International Symposium on A Multidisciplinary Approach to the Prevention and Management of Pelvic Floor Dysfunction, hosted by the International Urogynecological Association (IUGA). Geared toward allied health professionals, this 2-day event offers a fantastic program filled with up to date, evidence-based information about pelvic floor dysfunction, birth trauma, nursing and physiotherapy management, and the role of the multidisciplinary team.

As a member of an endorsing organization, CSPM members receive a reduced registration rate!

Next CSPM Journal Club on January 27! 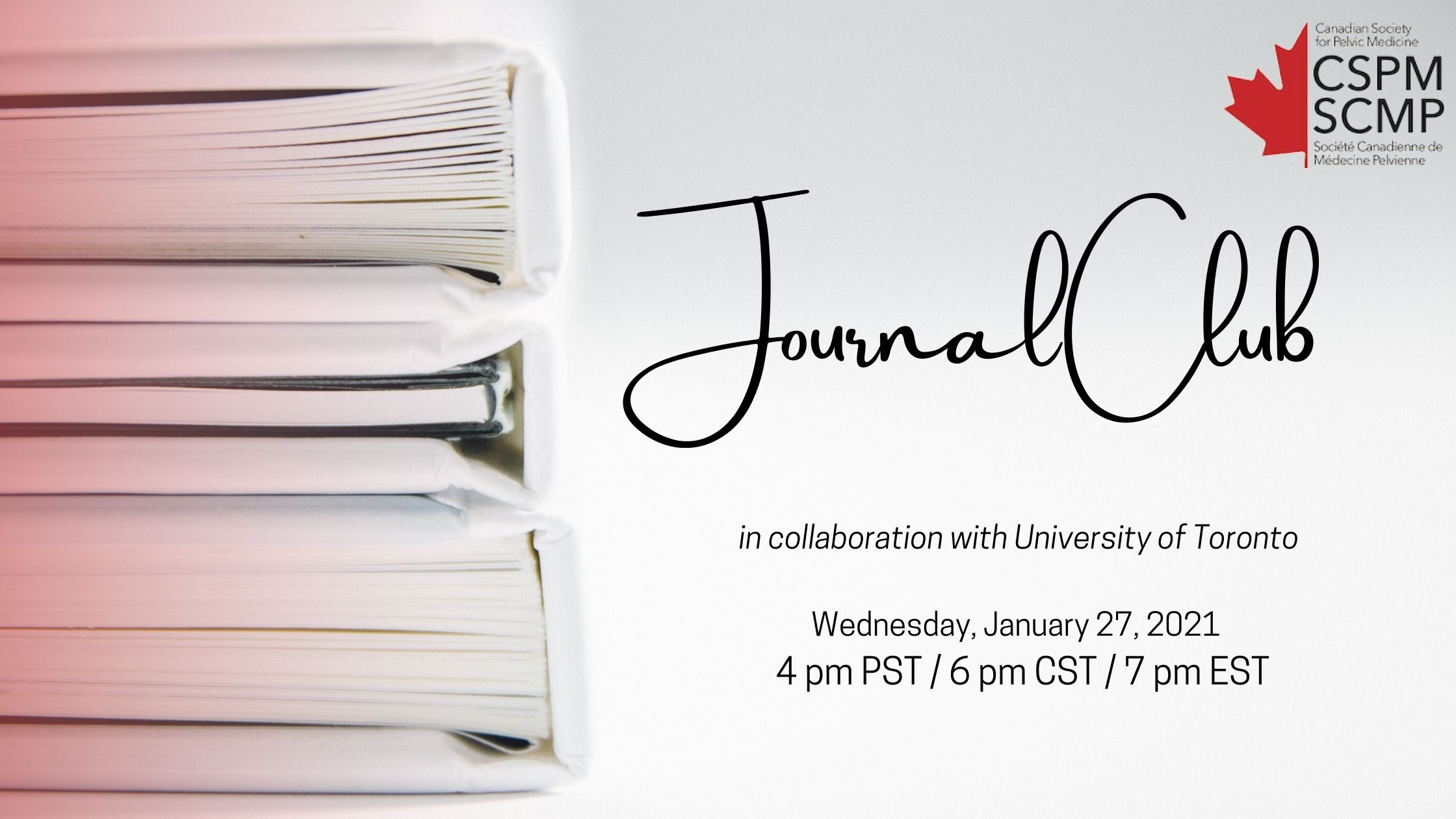 We are excited to announce the second CSPM Journal Club meeting, sponsored by the University of Toronto!

Join us via Zoom on Wednesday, January 27, at 7:00pm Eastern/4:00pm Pacific. RSVP to This email address is being protected from spambots. You need JavaScript enabled to view it. to reserve your spot. We'll send you the Zoom link and selected article.

The Research & Development Committee has recently convened and have developed an on-line application tool for CSPM members to apply to be part of/develop a Canadian Pelvic Floor Research Network. All network members will have the opportunity to be actively involved in developing, implementing, conducting, and publishing research studies.

The Network's purpose is to enable clinicians and researchers to work together cooperatively and conduct multi-center research projects. We propose that this Research Network operates under the mentorship of the Research Committee. This Network is open to everyone, including junior faculty and fellows. Interested members are welcome to join. Please reach out if you have any questions.

The link to the application is:  https://survey.ucalgary.ca/jfe/form/SV_6o1a4zjDR46ivXv

We are a group of obstetrician-gynecologists with expertise in female pelvic floor medicine and reconstructive surgery (FPMRS), and we write to you in response to your recent publication of “Posterior Vaginoplasty With Perineoplasty: A Canadian Experience With Vaginal Tightening Surgery” by Austin et al.1 We are concerned that the depiction of vaginoplasty and perineoplasty in this paper does not represent the gold standard of pelvic floor medicine that patients deserve. Furthermore, the attitudes underlying this article undermine women’s healthcare providers and emphasize unjust influences on the healthcare system.

We are excited to announce the new CSPM Journal Club! The first meeting – including a wine recommendation and virtual tasting event – is sponsored by the University of British Columbia.

"The prevalence of urinary incontinence (UI), and lower urinary tract symptoms (LUTS) increases in association with age. Data from Canada were last obtained in 2008 in the Canadian Urinary Bladder Survey, the first cross-sectional Canada wide epidemiological study to determine prevalence and severity of UI and LUTS in men and women. Despite the high prevalence of IU/LUTS, few people view their symptoms as a problem or burden and fewer still express a felt need for help. In the Leicestershire MRC incontinence study only 2% of respondents reported symptoms which were bothersome and also socially disabling. The majority viewed their synmptoms as a minor inconvenience, althought many more of those over 80 years of age reported bothersome symptoms compared to those aged in their 40s, with 15.3% versus 1.6% respectively reporting felt need. The aim of this study, in a nationally representative sample, was to update current data on the prevalence of UI, examine felt need for care, the extent to which these conditions are felt to be "taboo" and the experience of care, where saught."

CSPM releases this CSPM MUS Bulletin in response to the June 2020 CMQ rapport d’enquête entitled Les complications liées à la mise en place d’une bandelette sous-urétrale. This report is the latest effort by a regulatory body to address complications related to mesh-based surgery for pelvic floor disorders, but is not unique as similar mandates have been previously enacted in Australia, Scotland, Britain, and the US. All of these regulatory efforts are driven by distraught patients who cannot find providers to manage their complications. Within Canada, these patients are also vulnerable to profit driven “experts” in the US that take advantage of their misery and lack of alternatives, while bankrupting provincial service plans. As the premier Canadian organization in the field of pelvic medicine, CSPM has a responsibility to address this care gap. The responsibility is not just to patients, but also to providers that manage these complications, as a failure to provide care for these women, will lead to further restriction on surgical choices. Again, please read CSPM's response HERE.

Evaluation of a Mayo Scissor as a suburethral spacer compared with a Babcock clamp holding a loop of tape under the urethra results in different rates of abnormal bladder outcomes 12 months after retropubic midurethral sling surgery. Information about how the postoperative courses differ, allows surgeons to better counsel patients preoperatively or tailor their choice of technique. Read More...

As a point of information, The Canadian Society for Pelvic Medicine wants our members and other stakeholders to be aware of the following report released in June 2020 entitled: Les complications liées à la mise en place d’une bandelette sous-urétrale. We are working on a bilingual response, providing important information related to this subject and will be identifying Canadian Centres that will see patients with mesh complications. Stay tuned for more information in the coming days!